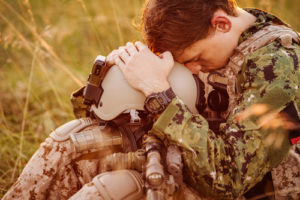 Doctors are human and, unfortunately, misdiagnosis of physical and mental health conditions happens. Mental health practitioners often use the principle of “best guess” to arrive at a diagnosis. Post-traumatic stress syndrome (PTSD) can be misdiagnosed.
Common diagnostic labels sometimes associated with a misdiagnosis of PTSD include acute stress disorder (ASD), brief psychotic disorder, adjustment disorder, bipolar, depression or depress-based disorders, attention deficit (hyperactivity) disorder—ADHD, ADD, AD-HD, panic disorder, obsessive-compulsive disorder (OCD), or malingering.
PTSD may be confused by a diagnostician for a variety of reasons, including the practitioner’s lack of experience and overlap of symptoms. The problem is often a lack of fundamental understanding, such as duration or severity of symptoms. For instance, symptom severity is used to distinguish PTSD from other diagnoses.
Much controversy surrounds the U.S. armed forces’ diagnostic application with PTSD:

The VA is accused of intentional misdiagnosis because, if a returning soldier is given a personality disorder diagnosis, this is (according to the VA) a “pre-existing” condition that doesn’t require compensation/treatment from the military. As such, about 1,000 soldiers (2005 to 2007) were dishonorably discharged each year with personality disorders.
Although PTSD and TBI share similar symptoms, recent studies show clear differences between the two. In addition, it’s highly unlikely that a patient with TBI will ever develop PTSD. In moderate-to-severe TBI, the patient is unlikely to recall the traumatic event to meet the initial diagnostic criterion. Significant differences in treatment protocols also exist.
PTSD is frequently in the news and is typically associated with veterans’ combat-related trauma. The practitioner may fail to recognize PTSD, or complex PTSD, in a non-veteran client. PTSD victims may have suffered many other kinds of trauma, such as sexual abuse. The psychiatrist or psychologist may associate the victim’s symptoms with depression or anxiety, robbing the victim of the proper treatment needed to heal.
If you or someone close to you has suffered because of a misdiagnosis of PTSD, you may have the right to file a legal claim for medical malpractice in order to recover lost wages, medical bills, and pain and suffering. Contact Lombardi and Lombardi, P.A. at 732-564-7165 or via our online contact form to discuss your potential matter now.

The articles on this blog are for informative purposes only and are no substitute for legal advice or an attorney/client relationship. If you are seeking legal advice, please contact our law firm directly.