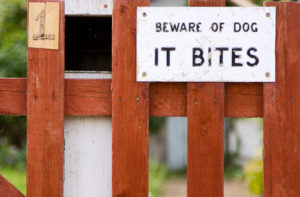 Even though an animal such as a cat or a dog may be someone’s pet, this fact does not mean that the animal poses no threat of danger to you or your loved ones. Indeed, injuries like dog bites are more common than you would think in the United States. According to a recent study published by the Center for Disease Control, approximately 4.9 million dog bites occur each year in the United States. Given that the United States’ population is approximately 325.7 million people, this means 1 out of every 69 people in the United States suffer a dog bite injury on an annual basis. Because the risk of harm posed by even a domesticated animal is higher than you would reasonably expect, it is important to know what to do after you are attacked by an animal. Having this knowledge may help you to heal from your injuries properly and it may also allow you to obtain the monetary compensation you need to make yourself whole after suffering an injury from an animal attack.

Depending on the type and severity of the injuries inflicted on you after an animal attack, you may not be able to get a good view of the attacking animal or its owner in order to properly identify it or it’s owner. However, it is crucial that, more quickly than not, you ascertain what type of animal attacked you, the specific breed of the animal that attacked you (if it was a dog), and whether the animal is wild or has an owner. Doing so will allow you to provide a medical professional with more information concerning the cause of your injuries and how to treat them. Moreover, legally speaking, identifying the type of animal and if it has an owner will help you to assess whether the attacking animal is one that New Jersey law would categorize as vicious or potentially dangerous and whether you are able to sue someone for the injuries you suffered because of the animal attack. If the animal is wild, you likely will not be able to sue anything for the harm the animal caused you. However, if the animal is owned by a person, New Jersey law permits the injured to sue the owner of the animal that caused the injuries.

In addition to being able to identify the animal that attacked you and whether or not it has an owner, another important action you should take after an animal attack is to seek medical attention for your injuries. Seeking medical attention for your injuries will not only be beneficial to your overall physical wellbeing, but it may serve to strengthen a potential case against the animal’s owner. In terms of physical well being, some animals have infectious diseases like rabies and, during an attack, this disease may be transferred to you when the animal bites, claws, or mauls you.
Consequently, in addition to seeking treatment for noticeable physical wounds, a medical professional will be able to determine whether you contracted an infectious disease from the animal before it is too late. In terms of building a case for a potential lawsuit, seeking immediate medical attention allows you to prove that it was the animal attack and not anything else that caused your injuries. Also, when being treated for injuries, the treating physician will keep a record of your injuries which indicates the extent of them and the steps used to treat them. This record may be used by you during litigation to prove the severity and extent of your injuries and the medical attention your injuries will need to heal them.

If you are attacked by an animal in New Jersey, you should call your local animal control agency and file a complaint concerning the animal and the attack. Doing so may allow animal control to catch the animal and ensure that it hurts no other people. When a dog inflicts an injury, New Jersey’s dangerous dog laws outline a special procedure for handling the dog. If you report the dog to the local animal control agency, the municipal court where the dog’s owner resides will have a hearing to determine if the dog is potentially dangerous or vicious. If the dog is declared potentially dangerous, then the owner will be permitted to keep the dog, but will have to adhere to certain legal requirements such as obtaining liability insurance or constructing an enclosure for the dog on the owner’s premises to ensure the dog does not threaten others. If the dog is declared vicious, however, the dog will be euthanized.

Because injuries resulting from animal attacks are considered strict liability actions in New Jersey, all you have to do to recover monetary compensation from the animal’s owner is to prove that the animal caused the complained-of injuries and that the animal had an owner. In New Jersey, you do not have to prove that the owner was acting negligently in handling the animal and that this is why the animal caused injury to another. For this reason, you generally need to present less evidence to prove your strict liability animal attack case than you would when bringing a negligence lawsuit. With that being said, however, it is a good idea to gather evidence by collecting all medical records related to the injuries, collecting all medical bills that have accrued because of the injury, taking photographs of the injuries and how they are healing as well as the scene of where the incident occurred, and gathering contact information of all eye witnesses to the animal attack.

Before filing a lawsuit based on the animal attack you suffered, it is always prudent to consult with and hire an attorney to represent you in the lawsuit. An experienced attorney knows the specific laws you need to adhere to in order to win this type of lawsuit, how to gather and present evidence persuasively on your behalf, and how to guide you through the procedural hurdles you must overcome to win your case.

Did you or a loved one sustain catastrophic injuries due to an animal attack that occurred in New Jersey? Don’t let the medical bills pile up while you wait for the negligent party or their insurance company to do the right thing. Right now, you need an aggressive personal injury attorney on your side, fighting to get you the compensation you need, want, and deserve. The skilled attorneys at Lombardi and Lombardi, P.C. represent clients injured because of animal attacks in Edison, Point Pleasant, Woodbridge, Freehold, and throughout New Jersey. Call 732-564-7165 or email us to schedule a free consultation about your case. We have an office conveniently located at 1862 Oak Tree Road, Edison, NJ 08820, as well as offices in Freehold, Brick, and Point Pleasant, NJ.
The articles on this blog are for informative purposes only and are no substitute for legal advice or an attorney-client relationship. If you are seeking legal advice, please contact our law firm directly.